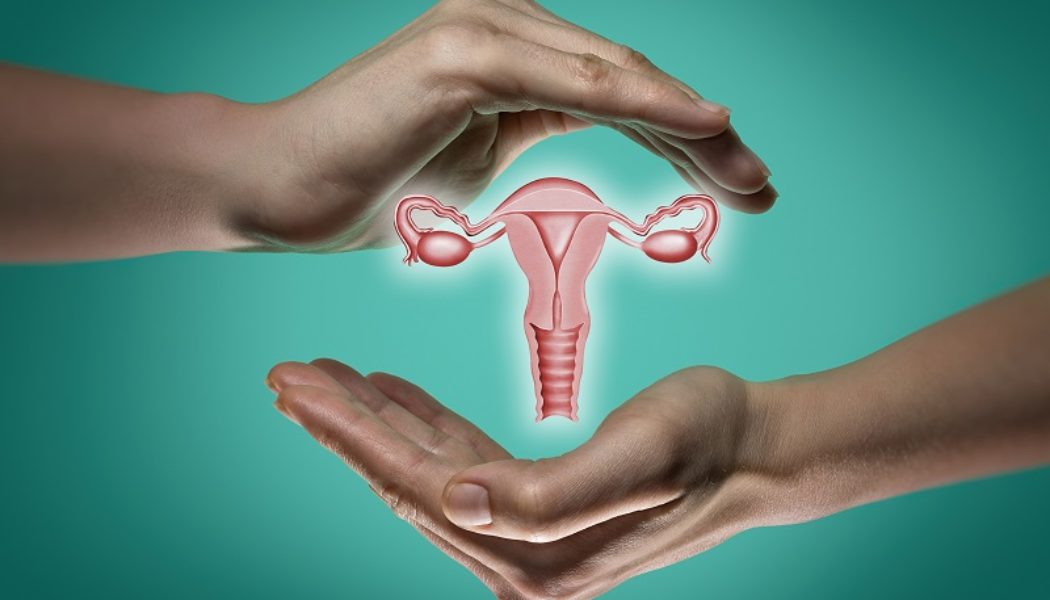 It can be very confusing to know the differences between ovarian and cervical cancers. Some people may even think that both are exactly the same thing. Both are indeed gynecologic cancers, but they affect different parts of the female reproductive system. Take a look at the explanation below and the signs you need to be aware of.

Where are the Ovaries?

The ovaries are located in the lower part of the abdomen, a little under the belly button and are situated on either side of the uterus. Ligaments that are attached to the uterus hold them in place. Ovaries are two oval-shaped organs and are the size of a large grape that produces ovum.

What is Ovarian Cancer?

Any cancerous growth that begins in your ovary is ovarian cancer. It is one of the most common types of cancer amongst women and it is one of the leading causes of cancer-related deaths. Ovarian cancer develops when there’s an error in the DNA of a cell (mutations) located in the area of the ovaries. The mutations make the cell grow and multiply at a rapid pace, which creates a mass or tumor of abnormal cells. These abnormal cells will continue living, but the healthy cells will die. They can also invade nearby tissues and spread elsewhere in your body. The three types of ovarian cancer are: 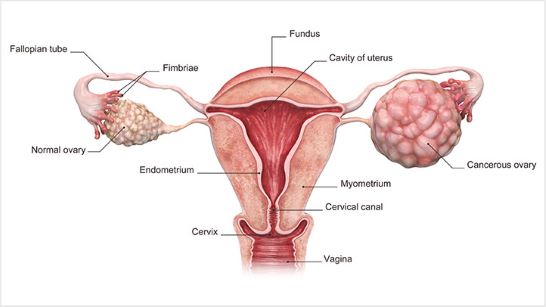 The cause of the mutation is still not clear, but doctors have identified some factors that can increase the risk of the disease. The risk factors of ovarian cancer are:

What are the symptoms of Ovarian Cancer?

The earliest stage of ovarian cancer has little to no symptoms. Even when there are symptoms, they usually resemble other medical conditions such as premenstrual syndrome and a temporary bladder problem. However, the symptoms of ovarian cancer will persist and worsen over time. The signs and symptoms are:

If you experience any signs that worry you, make sure to make an appointment with your doctor as soon as possible. Your doctor will perform a pelvic exam, imaging test, and blood test to give your doctor clues about your diagnosis and prognosis. However, to confirm if you do have the disease, some doctors may need to do surgery.

What is the treatment for Ovarian Cancer?

Where is the Cervix?

The cervix is the lowest part of the female’s uterus, which connects the uterus with the vagina. It is located in the bottom part of the abdomen and next to the bladder.

What is Cervical Cancer?

Cervical cancer is a type of cancer that occurs when the cells inside your cervix grow abnormally and invade other tissues in your body. It can spread to other parts of your body, mainly your vagina, bladder, liver, lungs, and rectum. The type of cervical cancer will determine your prognosis and treatment. The two main types are: 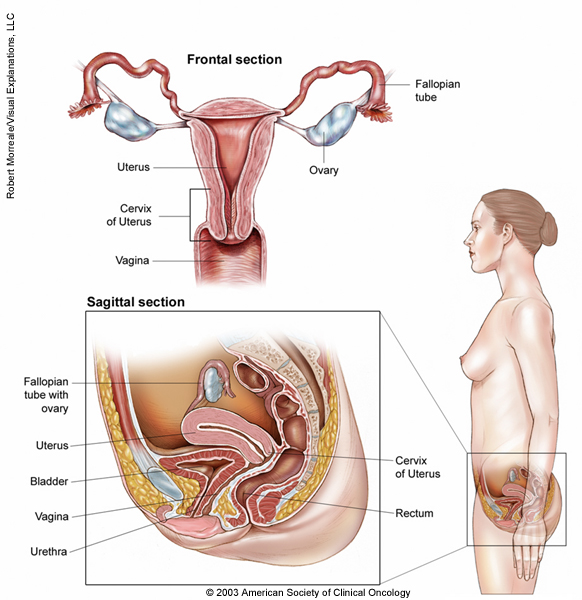 One of the main causes of cervical cancer is various strains of the human papillomavirus (HPV), which is a sexually transmitted infection. HPV is a common virus that can be passed through from any type of sexual contact. However, other factors increase the risk of developing cervical cancer. The risk factors are:

What are the symptoms of Cervical Cancer?

In its early stages, cervical cancer has no symptoms. Usually, the symptoms occur when it has progressed to a dangerous stage. The symptoms are:

Although vaginal bleeding does not always mean cervical cancer, it is not a normal condition and you will need to seek medical help as soon as possible. To protect yourself from cervical cancer, it is highly advisable for you to attend cervical screening (smear test). During a smear test, a sample of cells is taken from your cervix to be checked under a microscope for abnormalities. If your result is abnormal, it does not mean you have cancer, but you do need to get diagnosed by a doctor.

What is the treatment for Cervical Cancer?

Several factors determine your treatment for cervical cancer, such as your preferences, the stage of cancer you have, and other health problems. The most common treatments are surgery, chemotherapy, radiation, or a combination of the three. Surgery is usually performed on early-stage cervical cancer; your surgery options are: