What you need to know about Lung Biopsy

A lung biopsy is a procedure that involves removing a very small sample of lung tissue to be examined under a microscope for signs of disease. Your doctor may ask you to have a lung biopsy if something out of the ordinary is spotted on your chest X-ray or CT scan. The goal of this procedure is to create an accurate diagnosis.

A lung biopsy can be used to:

There may be other reasons for your doctor to recommend a lung biopsy. 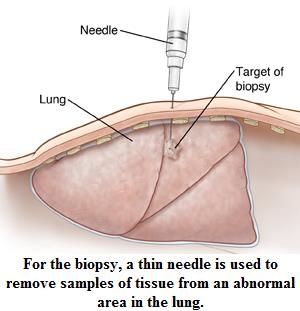 What does the Procedure Involve?

There are several types of lung biopsy. The type of biopsy performed depends on various factors, such as the type of lung problem, the location of the lesion, and your overall health.

Lung needle biopsy is typically performed when abnormal tissue has developed near the chest wall. This type of lung biopsy uses a needle that is guided through the chest wall into the suspect area with fluoroscopy (a special type of X-Ray) or computed tomography (CT or CAT scan) to take a small tissue sample from the outer area of the lungs. The needle is usually placed through your chest between two ribs.

During a lung needle biopsy, you will be given a local anesthetic. This means that you will be awake but the affected area will be numbed. A sedative may also be given to help you relax.

Transbronchial biopsy uses a flexible tube that has a close-focusing telescope on the end for viewing called a fiberoptic bronchoscope. The tube is inserted into your lungs through the nose or mouth. Your doctor may take an X-ray in order to figure out the right spot to do the biopsy.

Numbing medication will be sprayed to the affected area, so you will be awake throughout the procedure. However, you may be given medication through an IV to help you relax. This type of biopsy is done to collect a sample of your lung tissue that is close to the airway.

During this type of lung biopsy, you will be given general anesthesia, your doctor will create three small incisions on your chest between the ribs. Then, a thin, lighted tube with a camera on its end (called an endoscope) is inserted through the incision. Various types of biopsy tools can be inserted through the endoscope to take lung tissue for examination.

Also known as video-assisted thoracoscopic surgery (VATS), this type of lung biopsy checks problems on the outside of your lungs.

Open lung biopsy is usually suggested when other methods cannot get cell samples. During this procedure, you will be given a general anesthetic. Your doctor then creates an incision in the skin on your chest and a piece of lung tissue is removed surgically.

How Long Should I Stay in the Area?

If a local anesthetic is used, you should be able to leave the hospital on the same day. For general anesthetic, you may need to stay in the hospital overnight. Since you need to attend a follow-up appointment to discuss the results of the biopsy, it is advisable that you stay in the local area for about a week.

You will need to take it easy and rest as much as possible for a day or two after lung biopsy. It is important that you avoid strenuous activity for a week. If you have an open biopsy, the recovery time until you can resume your activity may take longer.

Lung biopsy is a safe procedure with a high success and accuracy rates. It is reported that percutaneous transthoracic lung needle biopsy has a success rate of 88 to 97%. However, the procedure does carry some risk. These include bleeding, coughing up blood, infection, and collapsed lung.

Are there Alternatives to Lung Biopsy?

Lung biopsy is the only procedure that can provide a definite diagnosis of lung cancer. In some cases, your doctor may suggest imaging tests, such as an X-ray or a CT scan. However, even after these tests, your doctor may still ask you to undergo a lung biopsy.

What Should You Expect Before and After the Procedure

For an in-depth analysis of a Lung Biopsy Procedure, watch this short video.

To check prices or to book a Lung Biopsy Procedure, in Thailand or anywhere else in the world, head on over to MyMediTravel now!